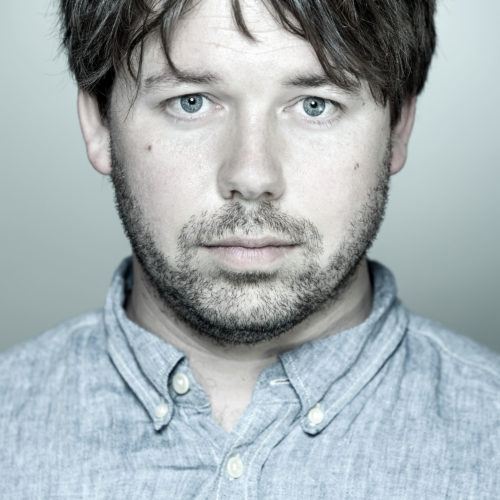 Bill Milkowski is a contributor to Down Beat in the United States and Jazzthing in Germany. He is also the author of «JACO: The Extraordinary and Tragic Life of Jaco Pastorius»

“A gifted Swiss pianist who in recent years has gained acclaim for his brilliant piano trio recordings with bassist Marco Muller and drummer Cyril Regamey (2012’s ‹Two Lost Churches› and 2014’s ‹Vestry La-meno›), rising star Marc Perrenoud makes a profoundly personal statement on Hamra, his scintillating solo debut for Unit Records. From cascading re-imaginings of jazz standards like ‹All The Things You Are› and Horace Silver’s ‹Nica’s Dream› to his delicate, classically influenced originals like ‹Conversation With Nino›, his crystalline meditation on John Coltrane’s ‹Naima› and his impressive counterpoint work on ‹Clouds for Dima›, named after his fiance, Perrenoud expresses himself with rare virtuosity and grace on this stellar solo outing.

Says the Geneva-based pianist-composer of his transition from trio to solo on the ruminative and revealing Hamra: «With this recording I wanted to look at myself in a mirror, facing myself. I cannot say I was ‹terrified›, as some artists have said about performing in a solo setting, but it is a complex exercise to try – to give everything you have inside your body and heart but also be able to accept your limits. And yes, sometimes I was confronted by new feelings and thoughts during the process. When I started to record at 9 a.m., alone in the studio with no audience and no artistic director, I started to be inspired by myself, by what I was playing in that moment. And this was strange for me. I felt a bit schizophrenic and started to wonder if egocentrism might actually have some good points, or possibly none at all! But basically, and maybe it’s a paradox, the most difficu! lt thing in this process was to find my place in this ‹band›.»

Fully immersed in the process, Perrenoud’s ‹band of one› came up with some inspired flights throughout the course of Hamra. That album title, he explains, was named for a section of Beirut, Lebanon, where he has spent a lot of time in the last year. «It’s a very creative and crowded neighborhood and I was influenced by the energy, the poetry and the joy I felt being there. The name also means ‹red› in Arabic, so it was possibly also about a women in a red dress I met there.»

Perrenoud’s exquisite touch and impeccable articulation on pieces like ‹Tyomnaya Noch› and ‹Le Roi et l’Oiseau› reveal his classical roots, while a decided jazz element comes into play on the jaunty, bluesy ‹Vestry Lamento› and in his Bud Powell-like right-handed runs on ‹All The Things You Are› and ‹Quintes (variations on 12345).› As he explains, «I’was born and raised in a classical environment. My parents are classical musicians. So I received some classical training but jazz was my little revolution! I first tried to improvise with the material I had, classical pieces, trying to understand the harmony and finish them in a different way.»

Listening to Perrenoud’s remarkable facility throughout Hamra, one gets the impression, that the young Swiss pianist is a perfect blend of Glenn Gould and Bud Powell in one potent package. «I was greatly influenced by both of them», he says. «I really started to listen to music through Bach and Glenn Gould and Bud Powell was the first jazz pianist I discovered by myself. We had no CDs of Bud Powell at home so the first jazz piano CD I borrowed from the school library was ‹Bouncing With Bud›. And I approached tunes like ‹All The Things You Are› and ‹Quintes (variations on 12345)› with both of them in mind. Both are variations on a small pattern or interval. ‹Quintes› is my take on the boring Hannon Piano exercise. So basically the idea was to take this 1-2-3-4-5 and try to have some fun with it. And on ‹All The Things You ! Are› I changed the form a bit and used the bridge as a pedal. There is also some modulation regarding the tonality. Actually, I considered those two tunes as base material and tried to invent a game with them. I felt lonely in the studio, so I tried to have some fun!»

That playfulness also manifests on Perrenoud’s ‹Rhythm Games›, which showcases his facile left hand lines against his flowing right hand runs. «I love drums», he explains. «And especially the relation between the different instruments on a drumset. I really like the dialogue between the snare and cymbals. So for this tune I listened to my trio drummer, Cyril Regamey, and I took a small part of his drum solo. Then I assigned different notes on the piano to every drum element. I made a kind of loop with those elements and started to play with it. I wanted to feel a non-pianistic rhythm, something hypnotic.»

Perrenoud also weaves a mesmerizing spell on his impressionistic ‹Conversation With Nino›, which he explains was inspired by the movie soundtracks of composer Nino Rota. And on ‹Naima› he takes a spacious, minimalist approach to the timeless Trane ballad. «I really love this tune», he says. «There is a kind of gap between the moods of this piece. The original one and then a cold melody based on the 4th and 5th intervals. I didn’t think too much when I played it, I just wanted space and trusted the instrument I had – an amazing Steinway at the Studio de Meudon that the piano tuner worked on every day. So when I came to the studio – it was very early in the morning and I was still a bit sleepy – I just listened to the sound of the piano and realized in that moment I wanted to play Naima.»