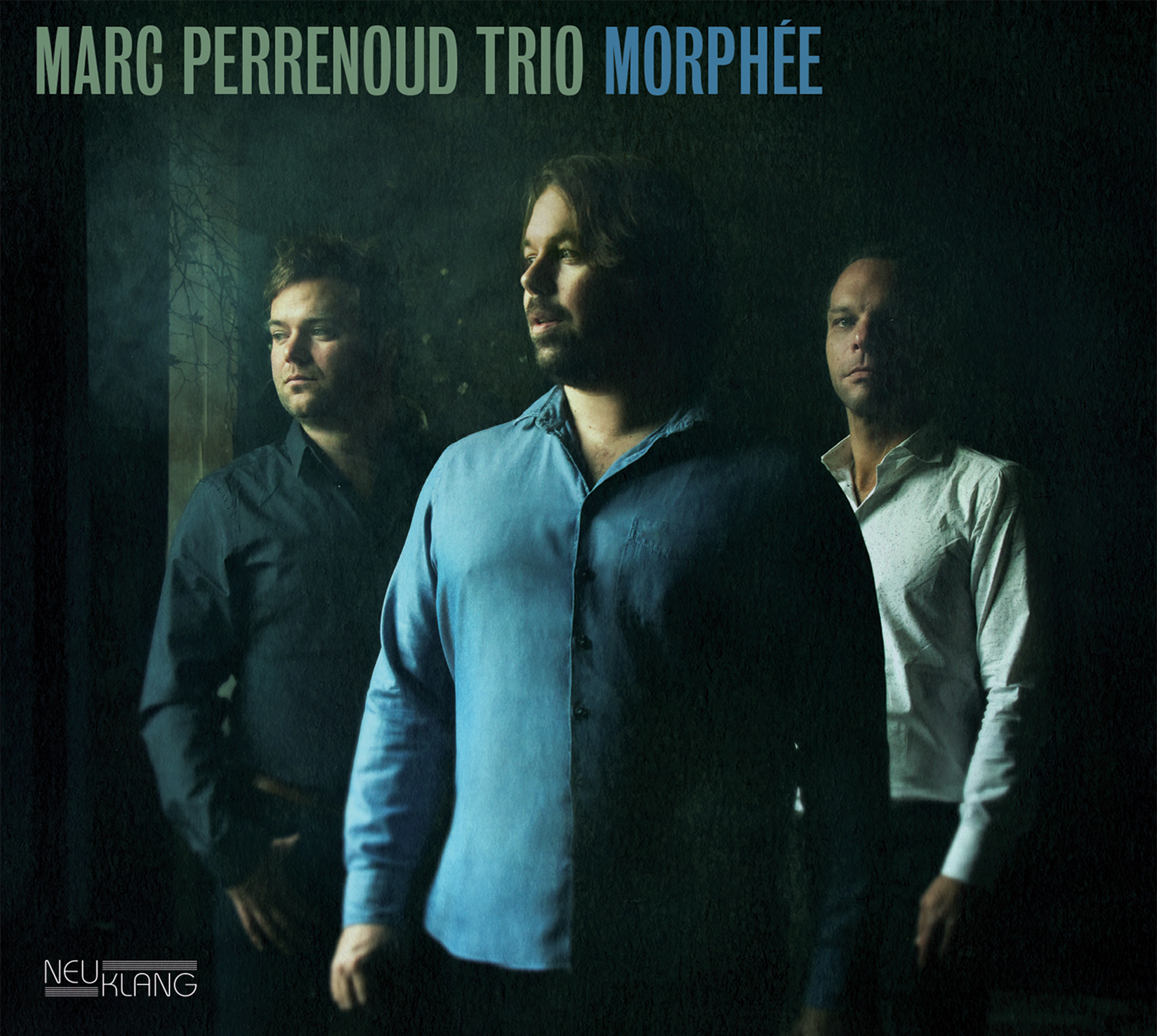 All tracks composed by Marc Perrenoud

Marc Perrenoud, at night on the pathways of dreams

«For some people, it’s natural to write music at night. Not for me. I’m more of a morning person.
Except last summer: it was too hot during the day, so I became a night composer…» A radiant
personality on the European jazz scene, pianist Marc Perrenoud does nothing like everyone else. At a
time when so many bands are slavishly adapting to fashions and trends, the 38-year-old musician
from Switzerland prefers continuity to passing fads. Formed in 2007 with drummer Cyril Regamey and
bassist Marco Müller, his trio has performed some 400 concerts worldwide. A longevity that pays off: in
twelve years, the three musicians have developed a strong complicity that shows off in their small but
essential discography.
After four albums («Logo», «Two Lost Churches», «Vestry Lamento», «Nature Boy») expressing its
solar side through melodic warmth, shimmering sounds and fiery grooves, here comes «Morphée»,
the Marc Perrenoud Trio’s fifth album. And this time, the sound world is mysterious and elusive like the
stuff of dreams. «Geneva was stifling in August 2019, recalls Marc. At night it was cooler, so I started
working on themes between 2 and 5am. I slept a little, wrote, slept a little again… In summer, the
relationship with time is different, things slow down. Writing at night, between sleep and half
consciousness, allowed me to enter a different world, with a greater sense of space and resonance, to
develop a free, open, timeless sound.»
To explore the possibilities of the new repertoire, Marc, Cyril and Marco spent a week in residence at
Château Rouge in Annemasse (France). «Up until the fourth album, we’d worked essentially on
instinct, says Marc Perrenoud. Our complicity is a huge advantage, it creates automatisms of thought,
we understand each other without having to explain anything.» But this complicity, which borders on
osmosis, can also become a challenge, warns Marc: «The brain wants to be comforted in its habits. It
takes a lot of effort to reframe it, to find new ideas… At Château Rouge, we were isolated and thus
were able to work in a very different way, we had a lot of discussions!» With no material constraints,
only preoccupied with the music in the new album, the three friends were able to take the time to talk,
to experiment, to try out new forms of interaction.
The result is eight original compositions by the pianist, eight snapshots of nightlife captured in the
heatwave fever of summer 2019. With its «rather undefined» form, the title-theme fares gracefully with
the «elusive flutter of a dream», according to Marc. The breathless dynamism of «Night Run»
suggests a «game of urban hide-and-seek on a night without lights». In contrast, both takes of
«Stairs» reveal the astonishing potential of the simplest of materials: a scale descends and then
ascends like a «staircase», «a melody without any articulation», which allows «the trio to breathe and
open the soundscape in a very slow tempo». With «The REB», the urban atmosphere makes a comeback as
an «imaginary subway running in the heart of the night». «A Feather» evokes a forest
haunted by enigmatic shadows. In «East Tower», Cyril Regamey’s precise and glittering drumming
launches a ramshackle shuffle groove, its quasi-monkian melody in the unusual key of C sharp minor.
The caressing «Twenty Five Ghosts» offers another surprising rhythmic construct: 25 beats divided in
7-5-7-6, which creates a «slightly shaky machine, with a wooden leg», Marc jokes. Written for
«Aksham», the first album of the quintet co-led by Marc Perrenoud with singer Elina Duni and trumpet
player David Enhco, «A Flower To My Daughter» is here metamorphosed into an intimate ballad,
introduced by Marco Müller’s crepuscular song on the double bass.

Recorded October 29/30, 2019, at the Studio de Meudon (South-West of Paris), on a magnificent
Steinway grand piano, the album benefits from Julien Bassères luminous sound recording.
Furthermore, the fascinating cover photos by Liliroze ideally embrace the music’s dreamlike
atmosphere. On the front, the three musicians seem to welcome the daylight, happy to have survived
their nighttime anguish. On the back, an old upright piano with elaborate candlesticks conjures up a
ghostly mist between blue-green pastels and night birds.
In Greek mythology, Morpheus is the god of «prophetic dreams», who «gives form» to dreams. The
Marc Perrenoud Trio has given them a voice.